skip to main content
Return to GRE
You are at:Home»News»Extending the Reach of Fordham’s Graduate Religion Education

Over the course of the past 20 years, the Graduate School of Religion and Religious Education (GRE) has partnered with the Catholic Extension Society’s Young Adult Leadership Initiative to reach master’s and doctoral candidates serving as leaders in hard-to-reach Catholic communities.

In the society’s early days, it provided funds for priests to celebrate Mass from remote places, like the backs of rail and motor cars in isolated rural towns. Today, GRE helps the society reach far-flung parishes through technology, said Patrick Holt, Ph.D., assistant dean at GRE.

“These church leaders work in locations where they could not afford to leave their ministry to go and get the kind of schooling we offer,” said Holt. “Most of the ministry schools are in Northeast, the Midwest or California, but the  Catholic population is growing in the rural South and the borderlands of the Southwest.

As GRE has one of the most established online ministry programs in the country, they became a natural fit for the program’s mission, he said. The two-year program also hosts students in person at the Rose Hill campus twice for two weeks over the summer. Once there, they stay in campus housing, share meals, and bridge their online learning with real-world fellowship, he said.

“It’s here that they get to meet our faculty and create community and learn together outside of the classroom,” he said. “They then take those connections back to the disparate places that they work.”

Holt added the program has had great success, with many graduates going on to hold senior positions in dioceses and churches from as far away as the Asia Pacific region. Some also come to the Catholic Extension Society program having already achieved great success, such as Ryan Jimenez, bishop of the mission diocese of Chalan Kanoa in the U.S. Commonwealth of the Northern Mariana Islands.

Learning from the Bronx in the Western Pacific 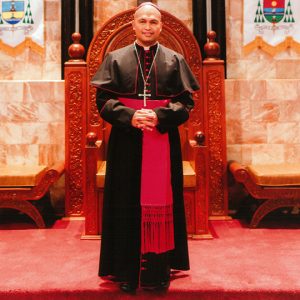 Bishop Jimenez is a doctoral student who immigrated to the U.S. to teach religion to high school students after several years of teaching in remote areas of the Philippines. He said that youth ministry remains close to his heart.

“Many of our youth are ‘nones’ and it’s really important for me to meet them where they’re at and think about where our young people are coming from,” Bishop Jimenez said in a phone interview. “Gone are the days of the strict reward-and-punishment model of religious education that says, ‘Do this; Do that.’”

Bishop Jimenez said that GRE professors working with the Catholic Extension Society have encouraged him to reflect and keep himself open to the realities his congregations face. He said that many in his mission are migrants to the U.S. who were born and bred as Catholics. But the unrooted circumstances of migration do not allow for regular access to the sacraments, forcing many to live outside of church doctrine.

“Many feel they cannot receive the sacraments and so they feel unwelcome,” he said.

He said that while much of the commonwealth is Catholic, not all worship or believe in the same manner. Part of the challenge is to connect with divergent constituencies. 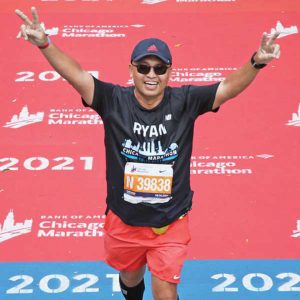 Bishop Jimenez at the Chicago Marathon

“For the community I’m in, one challenge is accepting and welcoming LGBTQ people,” he said.  “How do we find the balance between accepting and non-judgment as Jesus would and address pastoral issues even as I’m bound to follow rules? I can’t change church structure.”

Just shy of 50 years of age, Bishop Jimenez said that it has been 17 years since he was last in school. He said that he chose to go to Fordham to become a more effective leader.

“You can’t give what you don’t have,” he said. “I need to update myself with recent studies and different approaches to the practice of service so that I can inspire others. I think Fordham keeps my mind changing, growing.”

Meeting Mexican American Students Where They Are

Edgar Guzman became a master’s candidate in the summer of 2019 thanks to the program. He is the campus ministry director at St. Paul Catholic Newman Center in Fresno, California. He’s the only youth minister in an office that serves four campuses. His thesis focuses on ministering to second-generation Mexican Americans who have grown up in the U.S., but don’t necessarily feel as though they belong. Like Bishop Jimenez, Guzman is trying to meet the student population he serves where they’re at.

“The young people that I administer to are the sons and daughters of farmworkers,” said Guzman. “I try my best to relate to them as a Mexican American and as someone kind of living in two worlds.”

Guzman cited a scene from the movie “Selena,” where a Mexican American father complains to his son and daughter. 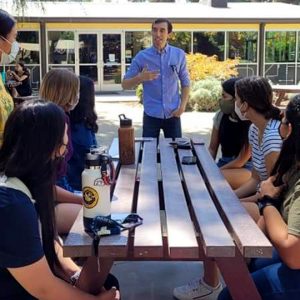 Edgar Guzman with students in Fresno

But Guzman noted that being Mexican is far from being part of a monolithic identity. There’s a great difference between regions, as well as different perspectives on gender roles, sexual identity, class, and age.

“I’m 33 years old and the majority of the students that I work with are about 10 years younger than me. So, there is definitely a generational gap,” he said. “I don’t have all the answers, but I have some suggestions and some insights that maybe they do not have right now.”

He said that in addition to practical theology, GRE has given him a sounding board of peers.

“Sometimes I feel very isolated and very alone just because there’s no other Newman Center [Catholic ministries at secular universities]  in the Diocese of Fresno. We’re the only one and I’m the only campus minister that’s full time,” he said. “But with my classmates who work with other young adults or in campus ministry, I’ve definitely been able to peek behind the curtain, if you will, of other ministries and specifically on the East Coast. So that’s been very helpful.”

He added that the program has given him the vocabulary to express himself and tools for insight. He also noted that some of the classes he’s taking were unexpected, like those on sociology and child behavior.

“That threw me off at first, because I said, ‘What does this have to do with religious education?’ When in reality, if I’m a minister, if I’m someone who’s going to be pastoring to young people, I have to learn how to walk with them, with all their baggage, which we all have,” he said. “So, the courses have taught me how to love in a more holistic way.”

All photos were contributed by interviewees.