skip to main content
Return to GRE
You are at:Home»News»Fordham Mourns the Loss of GRE Professor Steffano Montano
Photo by Taylor Ha

Steffano Montano, Ph.D., a scholar who dedicated his life to the cause of anti-racism and making religion relevant to ordinary citizens, died on Sept. 24 at the Westchester Medical Center in Valhalla, New York. The cause was complications related to bronchiectasis, for which he underwent a double lung transplant in August 2020, his wife said. He was 37.

“Steffano was a courageous educator, enthusiastic and hopeful, who was always dedicated to his students, even during his health-related challenges. He excelled in the art and practice of teaching, providing a perfect model of how to teach in an inclusive way and engage all students,” said Joseph M. McShane, S.J., president of Fordham. 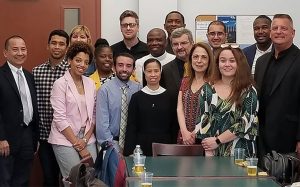 Montano joined the Graduate School of Religion and Religious Education in 2019 as a visiting associate professor in practical theology and religious education. Faustino “Tito” Cruz,” dean of the school said that Montano was the embodiment of the University’s mission. His work in anti-racist pedagogy and leadership was especially relevant, he said, as the school actively works toward creating a curriculum that is inclusive and confronts white supremacy. Montano was key to that effort, Cruz said, because he was willing to have conversations that others might shy away from.

“I’m so grateful that he spent the last three years of his life with us. I’ve never met anyone who was as courageous as he was,” he said.

“Having someone on the faculty who could actually name what had to be named was both affirming and challenging. He was someone who could have transformed life not only at GRE, but Fordham as a community.”

Montano was a first-generation Cuban American from Miami. He earned a bachelor’s degree in political science from Florida International University, a master’s degree in practical theology from Barry University, and in 2019, he earned his Ph.D. in theology and education from Boston College. His dissertation was titled Theoretical Foundations for an Intercultural, Antiracist Theological Education.

Hosffman Ospino, Ph.D., an associate professor of theology and education at Boston College who mentored Montano, said that when he first asked him why he wanted to do doctoral studies in theology, Montano told him it he wanted to accompany others as a scholar and show people the way to a better world and a better church.

“We journeyed side by side for several years through classes, conversations in my office and restaurants, meetings with other academics, writing projects, especially his dissertation, and family moments,” he said.

“Our daughters went to school together. We became good friends. We expanded each other’s ideas. We dreamed about possible projects and possible worlds. I feel his absence.”

Montano joined Fordham in 2019 on a two-year Louisville Institute postdoctoral fellowship. He taught classes such as Youth and Young Adult Ministry, Education for Peace and Justice, and Intercultural Ministry and Religious Education. His research spoke to the issues of both anti-racism and the cultivation of the faithful, in publications such as “Cultivating Young Hispanic Catholic Leaders,” which was included in Our Catholic Children: Ministry with Hispanic Youth and Young Adults, (Our Sunday Visitor, 2018), and “Addressing White Supremacy On Campus: Anti-Racist Pedagogy and Theological Education,” which appeared in the journal Religious Education in 2019.

He embraced the label of “practical theologian,” which he said meant learning first what people are doing to understand God on their own. 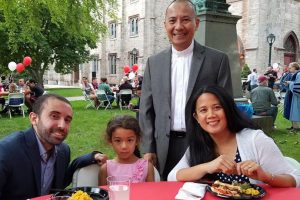 Montano, his family, and Faustino “Tito” Cruz,” at the Mass of the Holy Spirit in 2019.
Contributed photo

His wife, Christina Leaño, said that teaching had a transformative effect on Montano, who taught his last class virtually from his hospital bed.

“He was just filled with this renewed energy. It was really a transformation. This opportunity to teach at Fordham was such an important opportunity, and a lifeline as well,” she said.

He was one of the kindest people she’d ever met, she said, as well as an excellent listener.

“People would open up to him because he had this kind and unjudgmental presence that made you feel comfortable. He had a real humility and a love of people that was rooted in his health struggles. He knew the limits of life and the preciousness of relationships,” she said.

Rachelle R. Green, Ph.D., assistant professor of practical theology and education, said that “Steff,” as Montano was known, lived out the commitments of cura personalis in his scholarship, teaching, and friendship.

“He challenged us to imagine and enact a school and a discipline that goes beyond speaking about anti-racism so that we might become a school and community that embodies anti-racism in all that we do,” she said.

“Steff loved Jesus, and he loved to teach, and his love for both made us all better human beings. I have personally grown in my capacity to understand the justice work of education and to imagine more life-giving purposes for scholarship because of how Steff lived before us. I am deeply saddened by the loss of my friend, brother, and colleague and also greatly inspired to continue his work to make God’s world more loving, just, generous, and kind.”

Tom Beaudoin, Ph.D., a professor at GRE, lauded Montano for challenging and inspiring the school in his commitment to the urgency of antiracist theology, education, and ministry.
“He did not want us to settle for anything less than a radical vision of equality grounded in the family of all beings, the ‘kin-dom of God.’ As I experienced him, this was the good news to which he was committed, and I believe it remains our unfinished project,” he said.

Jeniffer Wowor, a doctoral student who took Foundations for Intercultural Ministry and Religious Education with Montano this spring, said the class felt like a home for her.
“I knew that he struggled with pain in teaching, but his eyes were always shining,” she wrote via email from Indonesia.

“Although he is no longer with us, I’m sure that ‘the light’ still shines, for his profound commitments to the path of liberation and equality, in the lives of those who know him. and in his wife and daughter’s heart. He also encouraged me to find my own and authentic ‘light,’ and I hope my future students will also be able to see it in my eyes.”

In an interview with Fordham News in 2019, Montano expressed optimism that real change was happening at GRE and at Fordham as a whole.

“The students in our school are already leaders. They’re already making an impact in the communities they belong to,” he said.

“I’d like to bring some of this pedagogy into their own practice—not just to help them change their communities, but to help create those sparks that can begin to change the way we do things in this country.”
Montano is survived by Leaño, his 8-year-old daughter Malaya, his mother Lourdes, his father Jose, and his brother Gabriel.

His funeral will take place on Saturday at 11 a.m. at Barry University in Miami. His ashes will be interned at the Honey Creek Woodlands, a memorial nature preserve at the Trappist Monastery of the Holy Spirit in Conyers, Georgia.

A memorial website has been set up for friends, colleagues, and family to share memories of Montano, and to watch the funeral as it is livestreamed on Saturday.