skip to main content
Return to GRE
You are at:Home»News»GRE Forms Partnership with the Bronx’s Aquinas High School

Just ten blocks from Fordham’s Rose Hill campus is Aquinas High School, an all-girls Catholic school in the Belmont section of the Bronx. Though small in number, the school population is diverse, comprising both Bronx-born girls as well as the daughters of immigrants from throughout Africa and Latin America. Many of the approximately 300 students rely heavily on scholarships and financial aid to attend the school.

Aquinas is no more than a 15-minute walk down the Bronx’s famed Arthur Avenue, yet it may as well be a world away.

“When I walk into the gates of Fordham, I can feel the divide between the life into which I’m walking versus the life I’m leaving behind,” said Faustino “Tito” Cruz, S.M., dean of the Graduate School of Religion and Religious Education (GRE).

“We talk about our global teaching and learning community and about educating for solidarity, service, and justice, yet we as an institution are at times divorced from the context about which we’re talking.”

This divide between GRE and its surrounding community—symbolically, a divide between theory and practice, said Cruz—was on Cruz’s mind as an important milestone arrived for GRE: the fiftieth anniversary of the school’s founding in 1969. 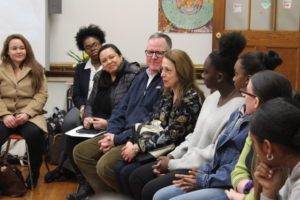 With the help of Fordham’s Center for Community Engaged Learning (CCEL), Cruz and the GRE faculty and staff realized that GRE’s neighbor, Aquinas High School, could be the first such relationship, and on Jan. 31, the pair officially commenced a partnership.

However, creating a sustainable and fruitful relationship would entail more than periodically sending a group of GRE volunteers to help out at the high school, said De La Torre.

“Establishing a partnership requires two things,” she said. “First, it entails a mutual understanding of relationship-building with one another. And second, the partnership is something that is co-created from the ground up as a project that hasn’t existed either at Fordham alone or with the partner alone. It’s something the pair works on together to build and sustain.” 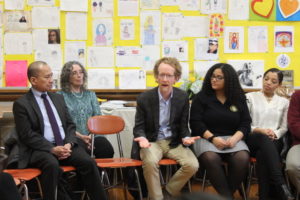 To that end, faculty, staff, and students from both GRE and Aquinas have spent recent weeks in conversation, visiting one another’s campuses and contemplating what a partnership might look like. Some ideas that have surfaced include creating professional development programs for Aquinas faculty as well as sending pastoral ministry or counseling faculty and students to conduct trainings.

“We’ve realized it’s not helpful to go into a place, identify and fix a problem, and then leave after a few years. That’s not sustainable for either party in the relationship,” said GRE doctoral student Vanessa Rotondo, FCRH ’17, GSE ’19, assistant director of operations and leadership at the CCEL.

“What we try to do instead is develop authentic relationships with the individuals and groups with whom we work. We get to know our partners and learn what their assets are, so we can highlight those assets with the resources that we can provide.”

Regardless of how the partnership ultimately takes shape, the presence of GRE at Aquinas has already made an impression, said the high school’s religion department chair Valerie Torres, Ph.D., FCRH ’83, GRE ’01, ’08.

“I can’t even find the words to say how impressed the girls were with the professors—they couldn’t believe there were 16 of them there at their school,” said Torres, who is also an adjunct professor at GRE. She had told them in advance about the GRE faculty, particularly Rachelle Green, Ph.D., an assistant professor of practical theology and religious education, and Steffano Montano, Ph.D., a visiting associate professor of practical theology and religious education. In these faculty members, Torres said, the girls could see a reflection of themselves.

“It was amazing for them. For the first time in many of their lives, they saw someone like them who was also a professor at a university,” said Torres. “Some of these students and their families have never even set foot on a college campus. So just having the presence of the GRE faculty at Aquinas—I think it will have a major impact here.”

Looking toward the future 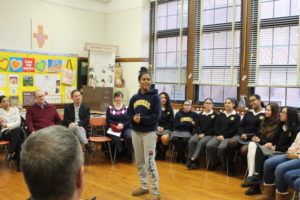 A student shares her experience at Aquinas. Photo courtesy of Aquinas High School.

The Aquinas partnership is the first of several initiatives that GRE has undertaken to mark its 50th year, said Cruz. In lieu of a single event such as a gala or banquet, the school is celebrating a yearlong observance that includes both service and scholarship.

Among these include a school-wide Community Day of Engaged Learning and Service, during which all GRE students, alumni, faculty, staff, and friends will be invited to participate in a service activity wherever they are located. In addition, this year’s Pastoral Mental Health Counseling Conference on March 6 will be followed by a special 50th anniversary reception, and an anniversary lecture is in the works for later this year.