Seven years ago, Kate Hoover planned her own funeral.

It was 2012, and Hoover, a student at Fordham’s Graduate School of Religion and Religious Education, was then a caregiving trainee at the New York Zen Center for Contemplative Care. An instructor had asked her to plan her future funeral arrangements—a strategy that could help her empathize with patients who were close to death.

As Hoover perused possible options, she came across “green burials”—low-impact funerals that help preserve natural habits, are free of embalming chemicals, and are characterized by simple wooden caskets or shrouds. Reading about these possibilities inspired her to create not only a shroud for herself but also Vale Shrouds: an independent business venture in which Hoover makes eco-friendly burial shrouds for both people and pets. 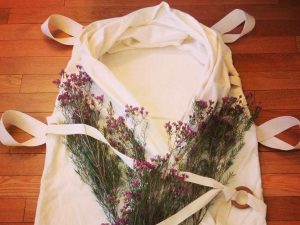 A burial shroud made by Hoover. Photo courtesy of Katherine Hoover

“It’s a practice in mindfulness—not sewing the shrouds in automatic [mode], but trying to stay alert and feel in a compassionate way,” said Hoover, who also counsels students as a clinical intern at Fordham College at Lincoln Center’s counseling and psychological services center. “That same mindful approach is what I’m trying to tap into when I’m talking with clients—letting whatever moment is there be enough. Not needing to have an agenda. Just meeting them where they are and talking about what’s important to them.”

Hoover’s shrouds are sewn with biodegradable materials: unbleached canvas, soft fleece covered by muslin, cotton tapes, and maple wood rings finished with beeswax and olive oil. They can be used in green burials, cremations, or conventional burials—alone or within a casket.

Her main client is Fitting Tribute Funeral Services, an eco-friendly funeral home in Brooklyn, and she’s sewn shrouds for other people, including a friend’s husband who recently passed away. 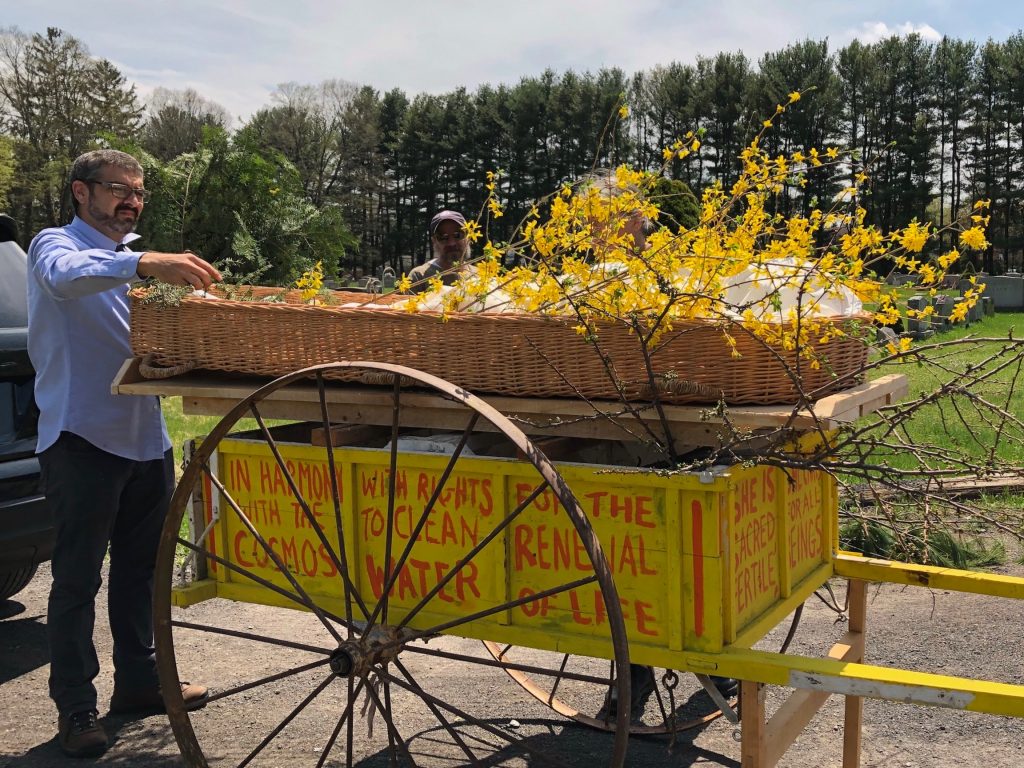 A deceased person sheathed in one of Hoover’s shrouds. Photo courtesy of the Kovel family and Amy Cunningham, the owner of Fitting Tribute Funeral Services in Brooklyn

A Journey in Art and Spirit

Today, Hoover balances her shroud-sewing service with her graduate studies at Fordham, where she studies pastoral mental health counseling. She’s set to graduate this May (and start the job hunt, like many of her peers). But Hoover has experienced many milestones that have led her to today.

Art and design were constant threads in her life. She studied sociology as an undergraduate at Barnard College and fashion design at Parsons School of Art and Design. (Her first foray into the fashion world, though, was in middle school, when her grandmother first taught her how to sew.) Over the next decade, Hoover worked multiple jobs in the garment and publishing industries. She ran garments to a factory, picked up patterns, and packed shipments. She sewed clothes on a small scale for an indie boutique. And she designed all types of things: coloring books, PowerPoint presentations, advertisements and page layout for an alt-weekly.

At the same time, she was slowly becoming more spiritual. Hoover was raised just north of Atlanta, Georgia. Her parents were Christian, but not deeply religious—the most they did was go to church when visiting relatives, said Hoover.

After she completed a yoga teaching program in 2011 and went on a silent weekend retreat at a monastery, Hoover said she became more in touch with her spiritual side. But what truly changed her life trajectory were the two years she studied and volunteered with the New York Zen Center for Contemplative Care. These were the years that inspired her to pursue a career in counseling and formalize a Buddhist practice, she said.

“I was curious about how people heal and how that’s supported not only physically, but in your community and spirituality,” said Hoover, tucking her gray-flecked hair behind her ear. “And as I got more into it, I realized that it was because people have shown up for me at different times [in my life], and I wanted to pay it back.”

Living Life with a Renewed Perspective

As part of her training, Hoover was a chaplain intern at Mount Sinai Beth Israel in New York City from 2012 to 2014. She worked in an inpatient addictions unit, where she spoke with people addicted to opioids and methamphetamines. They varied in their religiosity: atheist, agnostic, pious. But what mattered the most, said Hoover, was giving them the proper spiritual support. 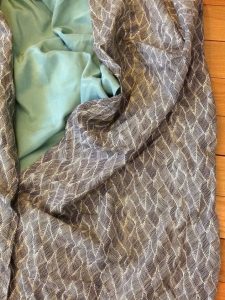 “It’s really about meeting people where they are, in whatever religious context they come from,” she said. “It’s sort of like … improv, in a way. It’s showing up and seeing what is needed.”

Hoover said she has infused this energy into each burial shroud she makes. The first time she ever sewed a shroud—her own—was a powerful moment. She had cut a cotton canvas cloth, longer than the length of her petite frame, and shaped it into one of her custom-made biodegradable blankets. While she was sewing, she thought about the most important people and events in her life. By the time she finished, they became very clear.

“To see the shroud come together was like watching my mortality become real,” she said in an interview with an online blog. “However, it was also very life-affirming. By defining those things that are important to me, I could make sure to give them more attention with whatever remaining time I have.”