skip to main content
Return to GRE
You are at:Home»Faculty and Research»New GRE-WFUV Course Explores Faith in Popular Music

In her electrifying performance of “Up Above My Head,” on the sixties television show TV Gospel Time, African-American singer Sister Rosetta Tharpe is surrounded by a choir who clap along as she delivers an unusually gritty electric guitar solo on the spirited gospel number.

Tharpe’s ability to push the boundaries between religious and popular music positioned her as the “Godmother of Rock ‘n’ Roll” and a pioneering musician at the intersection of gospel, jazz, blues, and rock ‘n’ roll.

“So much of her catalog was what she used to sing in church, but it was rocked-up,” said Tom Beaudoin, Ph.D, an associate professor of religion at the Graduate School of Religion and Religious Education (GRE).

This month, a new GRE online course, which is free and open to the public, is exploring the spiritual significance of popular music through a theological study of Tharpe and seven other influential artists in music history— Robert Johnson, Elvis Presley, George Harrison, Carlos Santana, Lauryn Hill, Björk, and Beyoncé.

The course, Faith in Music: Sound Theology From the Blues to Beyoncé, kicked off this week and runs through May 19. It is part of a cooperative venture between the GRE and WFUV, a noncommercial, public radio station at Fordham. Through a series of podcast lectures, the course will examine how the artists’ faiths are reflected in their songs and how they’ve placed themselves in the service of their art. 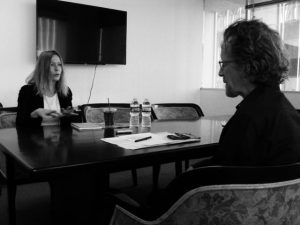 “There are some people who will think that these artists are only secular or profane,” said Beaudoin, editor of Secular Music and Sacred Theology (Liturgical Press, May, 2013), who teaches the 10-week course. “That’s one side of it, but [the course is]pushing back against the idea that popular music is spiritually thin.”

“I think on some levels music operates on a visceral level where you’re moved by the melody or the performance, which hits your heart and soul in a non-verbal way,” he said. “In other cases, there’s something in the words that adds more depth to it.”

Platt provided supporting materials for the course from WFUV’s extensive archives, including interviews with gospel singer Marie Knight, who sang with Tharpe; rockabilly pioneer Carl Perkins, who wrote Presley’s “Blue Suede Shoes”; and guitar legend Carlos Santana. Coupled with informative magazine and newspaper articles as well as music and video playlists, the WFUV interviews will serve as a window to the artists’ influences and theological backgrounds.

One of the more insightful modules focuses on former Beatle George Harrison, whose spiritual quest into Hinduism informed his later music. Among the songs highlighted in the course is the Beatles’ 1967 song, “Within You Without You,” which was written by Harrison and includes the sitar, a popular instrument in Indian classical music. According to Beaudoin, Harrison expresses what he has learned of reincarnation from Hindu teachers with the lyrics, “And life flows on within you and without you.” Harrison’s 1970 post-Beatles solo hit, “My Sweet Lord,” delves deeper into his spiritual convictions with its pairing of the Christian invocation ‘hallelujah’ with Hare Krishna chanting.

“For Beyoncé, who grew up Christian and singing in the church, I’m interested in how she gets to an artwork like Lemonade, which really gets overtly political and theological at the same time,” said Beaudoin.

Platt said in studying the works of artists as diverse as Beyoncé and Harrison, participants are able to discover the ways in which spirituality can shape one’s musical outlook.

“It’s there in a lot of music, but perhaps it’s hidden or under the surface,” he said. “I think what this course does is dig down underneath the surface to find some of those things that are informing the songs of that particular songwriter.”