skip to main content
Return to GRE
You are at:Home»Events»Providing Spiritual Support in the Face of Climate Change 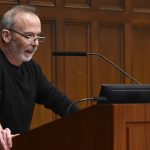 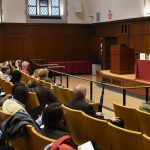 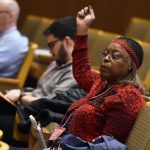 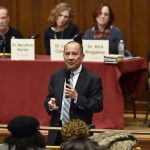 How could a climate emergency affect the work of pastoral caregivers, or people who provide emotional, social, and spiritual support? That timely question was at the heart of the Graduate School of Education’s 2020 pastoral mental health counseling conference, held on March 6 at the Rose Hill campus.

“We are to care for the habitat because it is essential to our care for others. To care for our habitat is to care for ourselves,” said the guest speaker, Ryan LaMothe, Ph.D., professor of pastoral care and counseling at Saint Meinrad Seminary and School of Theology in St. Meinrad, Indiana. “We can continue to care for people who are suffering from various maladies, psychological and physical, yet we must also keep in mind these larger forces and consider ways to intervene.”

This year, the annual conference was called “Between Hope and Despair: Caring in the Age of Climate Crisis.” In a series of three hour-long lectures, LaMothe spoke about how climate change could affect pastoral theology and care, identifying challenges for caregivers and offering solutions.

A Lesson from Mister Rogers

The effects of climate change are more significant than ever, said LaMothe. Over the past three centuries, global carbon dioxide levels have risen from 270 parts per million to well over 400, he said, adding that today’s  situation is serious. The rise of greenhouse gases have melted glaciers, increased sea levels, and created catastrophic storms; those who receive the brunt of the damage are the poor and people of color. And people around the world—including his clients—are starting to feel anxious, said LaMothe.

Our biggest challenges toward making our world green again include global capitalism, which exploits people and natural resources in the pursuit of profit, and nationalism, which keeps us from working toward the common good on a global scale, he said.

It’s also difficult to change our lives for the Earth’s well-being. We’re all busy—with our careers, with raising kids, and being involved in our local communities, he said. But people, including pastoral caregivers, can still make a difference.

“In terms of pastoral theology and pastoral care, we need to become more versed in making use of our disciplines as we seek to organize and cooperate with others with the aim of caring for the Earth and its residents,” LaMothe said, to an audience of more than 50 educators, students, spiritual care providers, and clinical practitioners.

With clients, pastoral caregivers can use spiritual practices to facilitate mindfulness about the environment, he said. He encouraged the audience to view their vocation through a more communal lens—to see the Earth and humanity as a whole. He asked the audience to practice “personal recognition”—recognizing every client for who they are—as most famously shown by Fred Rogers, an American television personality and Presbyerian minister who hosted the preschool television series Mister Rogers’ Neighborhood.

Lastly, he described the importance of “inoperative care,” in which a caregiver supports a client without following the rules and expectations set by society. He said a good example is a scene in Mister Rogers’ Neighborhood where, on a particularly hot day, Mister Rogers invites a black police officer to cool his feet in a plastic pool with him. Despite the racial tensions in their lifetime, the two share a simple, routine conversation—like any two human beings, LaMothe said.

“Inoperative care meant that Mr. Rogers was not operating out of the dominant cultural representations of the day,” LaMothe said. “Both men, in this moment of mutual care, were not operating under the delusions and contending disciplinary apparatuses of white superiority. They were operating under a mutual personal recognition and care.”

‘The Reality of Working With Human Beings’ 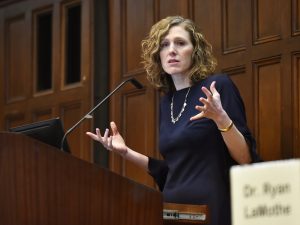 Climate change can cause negative psychological effects, including a decreased sense of predictability and control that can lead to acute stress and anxiety, said Werdel. She urged the audience to help clients find meaning in their post-traumatic experiences, especially those related to climate change.

“Stress and trauma remain intrinsically negative,” Werdel said. “But it’s moving through and enduring the stress and trauma that we come to find and feel and see something different about our world, about ourselves, and about others.”

She also encouraged the audience to explore psychological and spiritual questions with their clients—not as separate issues, but as one.

“The reality of working with human beings is this: When someone is sitting in front of you … they don’t parcel out, this is my psychological question and this is my spiritual question,” she said, to laughter from the audience. “They just come to you whole. And so we, who spend time thinking about the realities of stress and trauma induced by climate change, have to consider both of these questions together.”

Towards the end of the conference, LaMothe and Werdel held a panel discussion with two faculty members in the pastoral mental health counseling department: Kirk Bingaman, Ph.D., and Lisa Cataldo, Ph.D.

Bingaman thanked LaMothe for encouraging the audience to neither look away from nor discount the impacts of climate change. Cataldo urged the pastoral caregivers in the room to enter every clinical encounter without memory, understanding, or desire—three things that could impede their work.

Kirk Bingaman, Ph.D., addresses the audience during the panel session.

‘The Simple Power of Connection’

An audience member, who identified herself as a hospital chaplain who has supported new amputees and young mothers with traumatic brain injuries, shared a personal story. She said she was a quadriplegic who was once told she would live in a nursing home for the rest of her life. But now, she works as a chaplain who provides emotional and spiritual support. She noted the importance of hope and the place where it is born—“the simple power of connection” with others. 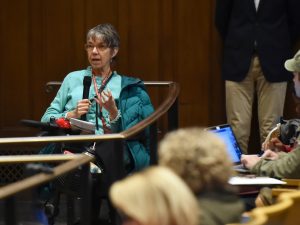 An audience member, who identified herself as a hospital chaplain, shares her personal story.

In the last minutes of the conference, another audience member commented on the positive ways that society is combating climate change, from efforts as wide as New York’s recent ban on single-use plastic bags, to the conference committee’s decision to use paper plates during the breakfast buffet.

“Any last comments on how we can go forward and encourage our children to be positive and hopeful and do concrete actions to help the environment?” the audience member asked the panelists.

On a projector screen, Werdel had shared her son’s recent elementary school assignment. He and his classmates were asked to write their wishes for the New Year. “My wish for 2020 is … save white rhinos,” he wrote, beneath a hand-drawn sketch of two rhinos smiling under a sunny sky.

“I cannot save these rhinos, or the thousand other species that will die because the rhinos die,” Werdel told the woman in the audience. “But I can instill a sense of, hopefully, optimism and agency for what he can do, encourage him to speak out loud his sadness and his loss … Caring about other things—people and places and spaces—that are outside of what he normally sees.”