skip to main content
Return to GRE
You are at:Home»News»John L. Elias, Professor Emeritus Who Taught In 2 Fordham Schools, Dies at 85
Photos courtesy of Rebecca Elias

John Lawrence Elias, Ed.D., a professor emeritus who taught in two schools at Fordham, spearheaded the development of three doctoral programs, and maintained lifelong relationships with students and faculty, died at home in Madison, New Jersey, on Sept. 25. He was 85.

“Education was not just a job,” said longtime colleague Kieran Scott, Ed.D. “It was a vocation for him that gave profound meaning to his life.”

“He acted as the academic bridge between the two schools,” Cattaro said. “[And] John was a cherished colleague and mentor to me in my early academic career, in addition to being a friend.”

At GSE, he helped establish the Ph.D. program in educational leadership (now known as the Ph.D. in church and non-public school leadership). The program produced alumni who went on to become university presidents, bishops, vicars of education, and congregational and past presidents of high schools worldwide, said Cattaro.

At GRE, Elias was instrumental in shaping two doctoral programs: the Ph.D. in religious education and the Doctor of Ministry program.

“He realized that to complement religious education, we needed to be doing a kind of theology that served our students in their professional practice,” said Thomas Beaudoin, Ph.D., professor of religion. “As a result of what he did, we hired more practical theologians, including our current dean.”

But Elias’ 35-year-long relationship with Fordham was deeper than the programs he developed, said his colleagues. To Elias, Fordham was home.

“The first phone call I got as the new dean of GRE three summers ago was from John,” said Faustino “Tito” Cruz, S.M., dean of GRE. “He simply wanted to welcome me to Fordham and express his appreciation that I accepted the leadership of the school that he dearly loved.”

Elias was born on Dec. 23, 1933, in Asheville, North Carolina, to George and Josephine Elias. His early exposure to scholars in theology and education led him to become “one of the most significant writers in adult religious education of the 20th century,” said an online database of Christian educators of the 20th century.

His life at Fordham began in 1977 when he started teaching as a visiting professor at GRE. Over the next four decades, he delivered more than 80 scholarly addresses, served on multiple doctoral dissertation committees, and mentored dozens of students. He taught at Fordham until he was 78, said one of his two daughters, Rebecca Elias, FCLC ’96. 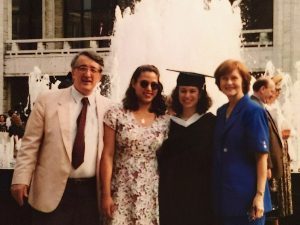 Elias and his family at Rebecca’s 1996 Fordham graduation

In phone interviews, his Fordham friends and colleagues described him as an affable, curious man who was easy to talk to. He was a “sage” who was politically savvy in academia and university life, said Gloria Durka, Ph.D., a retired GRE faculty member who knew Elias for more than three decades. With his wit and wry sense of humor, he put a twist on serious matters in the classroom. But perhaps above all, he was humble and respectful, said those who knew him.

“[He was] a true colleague who represents everything that you would hope a colleague to be,” said Durka. “He was my closest colleague, all these years at Fordham. And that’s a real gift—to have someone like that.”

Harold H. Horell, Ph.D., assistant professor of religious education, remembered Elias as a good listener. When Elias spoke, everyone in the room paid attention, he said.

“He used to sit with his head cocked to his right side, with a thoughtful look on his face. And then after the discussion was over, he would speak,” recalled Horell, who also directs the Ph.D. in Religious Education program. “His words carried a lot of weight because they often rang true.”

He was a brilliant scholar whose mind was “like a living card catalog,” said his past student Linda Baratte, GRE ’04.

“He set up the scaffolding, almost, in his coursework, and then invited you to do all the exploration and fill in all the gaps with his amazing research and resources he knew about,” Baratte said. “[But] he never wanted adulation, as much as he was worthy of it.”

“He felt that it was critical to raise up a mature, intelligent form of religious life in the church,” Scott said. “[But] at the center of all his education was a concern for justice. He felt that justice was indispensable for a peaceful society.”

Elias also advised dozens of students, from as far as Ireland, Africa, and South America. He invited them to his home for Thanksgiving and the Fourth of July so they could experience American holidays with an American family, said his daughter Rebecca at his funeral liturgy on Oct. 2.

One student even named his son after Elias.

David Gelpi, who earned both a master’s and a Ph.D. in religious education from Fordham, recalled the ways that Elias had shaped his life. In the first year of his Ph.D. program, he said, his older brother was killed in a car accident. Gelpi didn’t know how he could finish his degree. But Elias, in a “gentle” manner, convinced him to stay.

Today, Gelpi is a religious studies teacher at Fordham Prep. His son Elias—named after his mentor—was born in the early 1990s, when Gelpi was in the midst of his master’s program. Now he is a firefighter in Yonkers, New York, Gelpi said.

“[My son] quietly tries to put himself at the service of people in Yonkers, and I’d like to think that was something that John Elias helped to sharpen early on,” Gelpi said.

‘We Will Never Forget the Way He Made Us Feel’

One of Elias’ longest mentees and friends, David L. Coppola, Ph.D., GSE ’98, gave a speech at Elias’ funeral liturgy at St. Vincent Martyr Church, where they had met 25 years ago. Elias had mentored Coppola in the Graduate School of Education, toasted Coppola at his wedding, and commemorated Coppola when he was installed as president of Keystone College in 2014.

“No more emails, texts, or phone calls; no hand to hold; no warm embrace or spontaneous ‘Hellooohhh!’” Coppola said at the service. “But we will never forget the way he made us feel. And his witness of lifelong learning, embracing paradox, and selfless giving lives on in all of us.”