skip to main content
Return to GRE
You are at:Home»Events»Navigating Spiritual Care in the Age of Smartphones
Photos by Bruce Gilbert

And while that might seem like a good thing, it’s not, said Jaco J. Hamman, Ph.D., a Vanderbilt University professor of religion, psychology, and culture, who spoke at a Fordham conference on March 8.

Boredom, he said, often leads us to a place of imagination and creativity. But today, it seems, people never have the chance to get that far.

“I don’t think people know what boredom is anymore,” he said. “Because the moment they find themselves in a spot of milliseconds of waiting, out will come the phone.”

The technology that surrounds us—smartphones, computers, smart watches, fitness bands, tablets—has become affixed to our everyday lives. It’s changing what it means to be human. But that also means there are negative implications for our spiritual selves.

Today’s relationship between digital technology and spiritual care was the focus of this year’s annual pastoral mental health counseling conference, hosted by the Graduate School of Religion and Religious Education on the Lincoln Center campus. Two scholars in the field—Hamman, who is also director of Vanderbilt’s theology and practice program, and Kirk A. Bingaman, Ph.D., associate professor of pastoral counseling at GRE—spoke about how technology has both helped and harmed us, and how practitioners, clergy, and educators can better aid those in their care.

Technology taps into the way we’ve been created—as early as infancy, Hamman said.

He brought out a bright green baby spoon: the same spoon he used to feed his two daughters when they were babies. They’d fling it toward the floor, and Hamman would pick it up and place it back in front of them. A second later, the game between parent and child would repeat.

“Sigmund Freud called this the ‘fort-da’ game. It communicates that something that disappears can reappear,” Hamman said. “For Christian theologians, this is important because we believe that Jesus disappeared but will return. Psychologically, it’s a very deep dynamic in all of us.”

“Fast forward to all of us today. Here I have my cell phone. The screen is blank—and I awake my screen 20 times a day. Fort—there it goes. Da—here it is.” Hamman paused. “We play the exact same game that children played a long time ago.”

And while that may be natural, technology has introduced a lot of dilemmas. 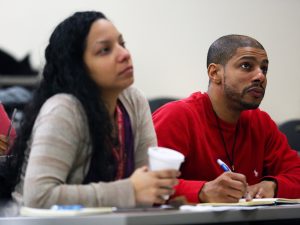 In addition to depriving us of our sense of boredom, it changes the way we relate to others. We’re wired to form relationships, Hamman said. The longer we look into the eyes of a stranger, the more positive chemicals our bodies release—neurotransmitters like dopamine and oxytocin, which help us relax and feel like we belong. The same thing happens when we pick up our phones and communicate with the people we care about. But the problem is smartphones don’t help us truly “discover” the other person, he said. They just show them to us.

Technology has delivered other dilemmas, Hamman said. Because algorithms only show us what they think we want to see, we’re not exposed to different ideas and perspectives, particularly when it comes to political news. Our personal data is stored in virtual warehouses and commodified.

Studies have shown that too much screen time lessens our capacity for compassion. And, perhaps worst of all, Hamman said, technology has taken away our sense of boredom—a feeling that often leads to imagination and creativity.

But it’s not all bad, said Bingaman. Technology has touched our lives in positive ways, too.

“Health care and medicine are one of the prime examples of the way artificial intelligence is coming to the aid of human beings,” he explained. We now have psychoeducational apps that aid anxious and depressed clients. Even though social media can increase “FOMO” (the fear of missing out) and anxiety, it also connects us with breaking news worldwide and our loved ones’ lives. And, he added, AI technology has helped his 86-year-old father regain his hearing.

A few years ago, his father received a cochlear implant on Johns Hopkins Hospital. Before the procedure, he had retained only five percent of his hearing, Bingaman said. After the surgery, he and his son took a walk together.

“We walked down one of his favorite places, touring the Gettysburg battlefield,” Bingaman said. “And he stops as we’re walking and says, ‘Oh, what’s that bird?’”

It was a white-throated sparrow—a bird he had not heard in almost 30 years.

Reexploring Our Humanity and Spirituality

But both Bingman and Hamman agreed that we all need to be more mindful about how we use technology—particularly pastoral mental health counselors, clergy, and educators with the people they serve.

“My emotions and feelings come home to a body. And it finds home in this body,” Hamman said—not a smartphone. 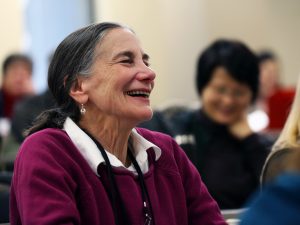 A guest laughs while Kirk Bingaman cracks a joke.

Bingaman spoke about the power of contemplative spiritual practices—centering prayers or mindfulness meditation, for example—that can reduce activity in the stress region of the brain and build “attention” muscle that deteriorates from too much screen time. He said these practices can be incorporated in therapy sessions with clients—and it’s important for the practitioners themselves to use them, too.

“Take that sacred pause. Get off the treadmill,” he said. “And if we want to help those in our care do it, we have to be doing it, too.”

More than 50 people—GRE students, faculty, and guests—attended the conference. In an open reflection, audience members shared what they learned from the day-long conference: to be more mindful of how often they use their phones, to understand their patients in a holistic way that includes their relationship with technology, and to try adding meditation or soothing music apps to their pastoral care sessions. Perhaps the most eye-opening one was the realization that technology is inescapable—but to live without it for a while can be freeing.

Bingaman recalled the time his smartphone was stolen during a trip to Nepal. His first reaction was anxiety. Then a German tourist told him, “You realize how free you are right now? You don’t have this compulsion … to know.” And then Bingaman realized something.