skip to main content
Return to GRE
You are at:Home»Alumni»Doctor of Ministry Grad Works to Keep Families Safe
Community organizer Michael Okinczyc-Cruz during a recent trip to Mexico

As a community organizer working with Latino and African-American communities in the Western suburbs of Chicago, Michael Okinczyc-Cruz, D.Min., learned that walking to and from school could be a perilous journey for many children in the area.

“The kids said they had daily experiences of constant fear where they were bullied or were in an environment in which there were fights every day,” said Okinczyc-Cruz, who graduated in May from the Graduate School of Religious and Religious Education (GRE) with a doctorate in ministry with a concentration in Latino ministry. “The communities that we work in also experience high rates of gun violence, so there is always the risk that kids traveling to school might be caught in the midst of gunfire.”

Through the ‎Coalition for Spiritual and Public Leadership, an organization he co-founded with a group of Catholic community leaders last year, Okinczyc-Cruz has been working with Latinos, African Americans, and other ethnic populations in the Chicago suburbs of Maywood, Melrose Park, and Broadview to curb violence and implement programs that engage youth and their parents.

“One thing that we’re doing now is mobilizing parents, families, and youth to develop safe passage programs in local public schools to ensure that students have a safe path to walk on their way to and from school,” said Okinczyc-Cruz, who serves as executive director of the organization.

At GRE, Okinczyc-Cruz explored Ignatian spirituality, which he said challenged him to reflect on how one’s commitment to spiritual life and discipline can inspire a change in disposition toward pain and suffering. In the suburbs of the West Side of Chicago, where minorities are often plagued by apathy, gun violence, and other social ills, an understanding of Catholic social tradition can be transformative, he said. 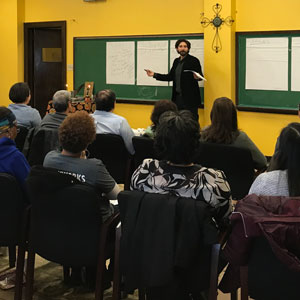 Okinczyc-Cruz speaking at the Coalition for Spiritual and Public Leadership, an organization he directs in Chicago.

“The families and young people that we’re working with should be able to access theological and spiritual resources that can help them put their faith into action, reflect on their own struggles, and work to create a just society. It’s a mandate of our faith,” said Okinczyc-Cruz, who considers himself a theologian as well as a community organizer, and sees the two as intertwined.

Through the coalition, Okinczyc-Cruz has helped to organize workshops and lectures with spiritual leaders, theologians, and community organizers that are focused on Catholic social teaching.

The organization also has committees focused on violence prevention and immigration— two of the most pressing issues facing the Latino and African-American populations.

‘Their Stories Are My Story’

A first-generation American, Okinczyc-Cruz developed a passion for working with underrepresented populations because of his upbringing. His mother is a Mexican-American who went on to become a teacher despite a poor upbringing; his father was a Polish refugee who once stayed at a refugee camp outside of Vatican City; and his maternal great-grandparents were migrants from Guanajuato, Mexico.

“In so many ways, I’ve been shaped by their experiences,” he continued, “Their stories are my story. I am who I am today because of them.”

Coupled with his biracial background, Okinczyc-Cruz said growing up in San Diego, a border city, also had a profound impact on him.

“I think early on, it was instilled in me that life oftentimes isn’t easy for immigrants and people of color,” he said.

“Learning about my family’s history gave me a perspective on American history [and]what immigrants and refugees had to go through and continue to go through as they struggle to obtain stability and opportunities for their families.”

With the programs he offers, Okinczyc-Cruz hopes members of his community will be able to not only address issues related to economic, racial, and immigrant justice in their neighborhoods, but also help to inspire change beyond the streets of Chicago.

“We’re not just forming leaders to be civically skilled so that they can work strategically for political and social solutions,” he said. “We also take seriously the cultivation and development of their spiritual life.”