skip to main content
Return to GRE
You are at:Home»Events»Stewarding Religious Heritage for a Secular and Post-Secular World

According to a 2015 Pew study on the changing religious landscape, 23 percent of Americans describe themselves as atheists, agnostics, or “nothing in particular.” These religiously unaffiliated people are also more concentrated among millennials.

At a seminar held at Fordham that focused on ministering in a secular and post-secular world, participants said religious leaders working with students are facing a new set of challenges.

When MoTiv, a team of chaplains from the Netherlands, began to engage engineer students from the University of Delft in discussions about their calling in a course on personal leadership, they discovered that spirituality was important to the aspiring engineers’ identities.

“The most beautiful things happened in those three [to]four hours,” said Günther Sturms, a MoTiv coach and university Roman Catholic chaplain, who spoke on Feb. 10 at the Lincoln Center campus. “The students started to share their inner stories. They told us ‘We’ve never done this with our lecturers. We’ve never had these kinds of conversations about why we are really here.’”

The MoTiv team said they had to strip away their own ideologies in order to create a safe and sacred space in which students could talk openly about their existential perspective, and could feel nurtured.

“Our predecessor found out that religion—as it was presented at the campus—had become obsolete, so we couldn’t do anything our predecessor did before,” said Hans van Drongelen, a spiritual counselor and MoTiv trainer.

Along with the MoTiv team, Rabbi Irwin Kula, an eighth-generation rabbi and co-president of the National Jewish Center for Learning and Leadership (CLAL), shared how today’s campus ministers can steward religious heritage creatively to reach religiously unaffiliated people.

“One of the big problems that we have is the language problem,” said Kula, author of Yearnings: Embracing the Sacred Messiness of Life (Hachette Books, 2007). “We literally don’t have a language that we can [speak], between legacy religions and the different types of secularism that we have.” 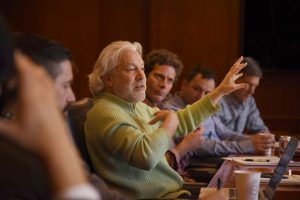 MoTiv and Rabbi Irwin Kula (center) shared practices for ministering in a secular and post secular world at a seminar held at Fordham’s Lincoln Center campus on Feb 10. Photo by Tanisia Morris

The MoTiv team said they’ve developed some practices that stem from a deep desire to understand student-engineers’ departures from established religion, juxtaposed with their apparent need to be guided by faith or inner motivations as they navigate the unknowns in their vocation.

“Maybe we need to become more curious,” said MoTiv coach Bart de Klerk. “This might be a trigger to redefine who we could be not only as [individuals], but as a community.”

Kula helps run CLAL’s Rabbis Without Borders, an innovative program training rabbis to minister outside of synagogue settings. He said that leaders who have a conservative predisposition lean toward wanting to conserve their religious tradition or else find new meaning in it. Those who he described as progressive are those typically interested in creating something new.

Both sides should be inquisitive if they want to change the religious landscape, he said.

“We need everyone in the drama,” he said. “Wherever you position yourself, if you want to grow, you better spend a lot of time on the side that you disagree with most.”

Thomas Beaudoin, Ph.D., associate professor in the Graduate School of Religion and Religious Education, organized the roundtable discussion in an effort to share contemporary perspectives on the issue. He said the participants’ perspectives “give us each something for our own work today.”