skip to main content
Return to GRE
You are at:Home»Alumni»Graduate School of Religion and Tuff City Styles Team Up on Theology and Hip Hop
(Above) Artists from Tuff City Styles designed a graffiti mural for the Association of Practical Theology’s biennial conference.

The sight of two-dozen theologians gathered in a Bronx tattoo parlor on April 9 was only slightly less incongruous than the springtime snow squall happening outside.

But the gathering at Tuff City Styles, across the street from Fordham’s Rose Hill campus, had a scholarly purpose. In keeping with the 2016 theme of the Association of Practical Theology conference, which took place April 8 through 10 at Fordham, the off-campus excursion was meant to exemplify the intersection between migration and theology, said Tom Beaudoin, PhD.

“We live in a world with boundaries and borders, which means we have to pay careful attention to who those borders benefit—who gets to have life and who doesn’t as a result of them,” said Beaudoin, the association’s president and an associate professor in the Graduate School of Religion and Religious Education (GRE).

“Practical theology in particular has a responsibility to be part of the living experiences of the neighborhood—to find out what brings joy and pain in the local environment, and how those are connected to the larger world… This starts with symbolically and literally going outside of the gates.” 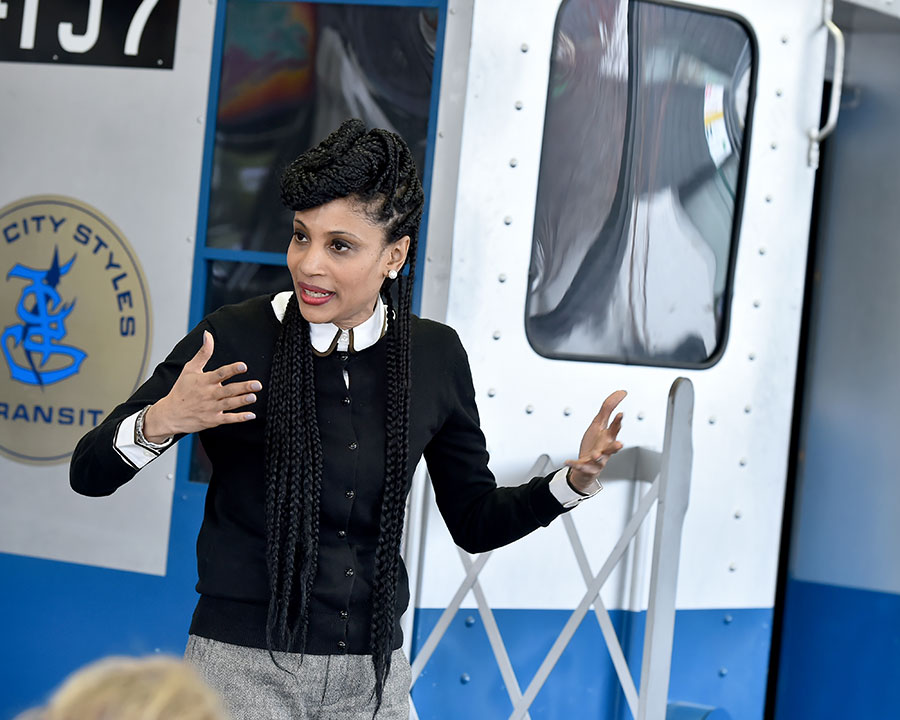 Tuff City is an art supply store and tattoo and piercing parlor that also houses a professional recording studio. Street artists from around the world are drawn to its backyard graffiti lot, where they paint over its walls on a daily basis.

“Not engaging with and serving the neighborhood—including the arts—is to all of our detriment,” Beaudoin said. “There are resources to be shared, [and]this is a relationship that could be life-giving on both sides and utterly essential to the mission of this University.”

In addition to giving association scholars from around the country a glimpse of the Bronx, Tuff City provided an apt milieu for a talk by alumna Tamara Henry, PhD, GRE ’14, an assistant professor of religious education at New York Theological Seminary.

Against a backdrop of a graffiti murals and life-sized replicas of subway trains, Henry offered an introduction to the world of hip-hop and how urban art—including rap music, DJing, graffiti art, and breakdancing—pertains to the world of practical theology.

“Hip-hop is an art form that is hewn out of hardship—specifically, the hardships of young people in the 1970s and 80s living in the throes of postindustrial economic and social distress,” said Henry, who is the youth minister at Lenox Road Baptist Church in Brooklyn.

“These art forms become a way in which young people can ignite resistance to the moral and social ills that are plaguing their community … whether it’s pervasive forms of housing discrimination, racial discrimination, unemployment, or the dwindling quality of education systems.” 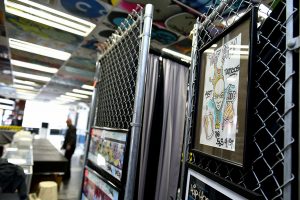 Hip-hop can serve as a pedagogical resource to illuminate themes relevant to both theology and hip-hop, such as “speaking from the margins, speaking truth to power, and contesting injustice,” Henry said.

The art form can also provide religious educators a window to their students’ world, Henry said, helping them to better understand how urban adolescents and young adults relate to their social and religious environments.

“Hip-hop has become a grammar of young people all across the nation,” she said. “We can begin to view it as an equally meaningful avenue through which religious identity is being formed and through which a new approach to religious education can be engaged.”

The conference initiated what Beaudoin hopes to become an ongoing partnership with Tuff City.

“They are interested in working with students to teach them about urban art, and I’d like to find ways to support and appreciate the Tuff City artistry within our gates and to deepen the partnership Fordham has with our neighborhood,” he said.

“There is a lot to engage with, not only around religion but also other aspects— art, urban life, racial diversity and justice, and local economic issues.” 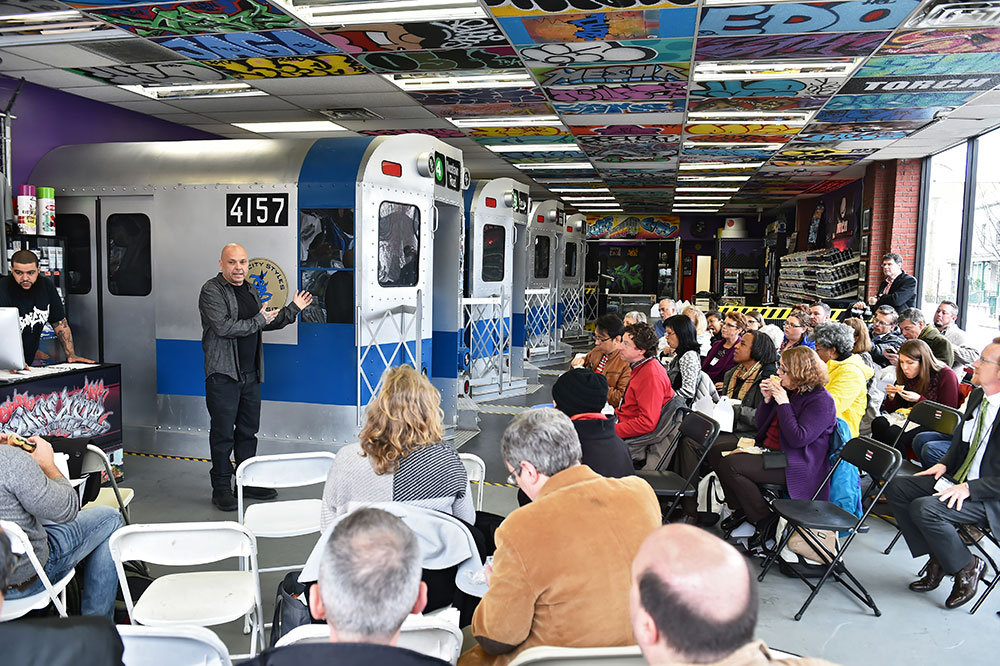 Joel Brick, owner of Tuff City Styles, welcomes members of the Association of Practical Theology. “Most of us started out writing graffiti—probably illegally—and now we’re street artists turned tattoo artists embedded in the hip-hop community and culture,” said Brick. “We’ve been in this neighborhood for 23 years, and at this location for ten. We have a model train in our backyard, which draws streets artists from around the world who come here to paint.”
Photo by Dana Maxson