skip to main content
Return to GRE
You are at:Home»Events»What Pope Francis Will Say to the Richest Nation in the World

On the eve of Pope Francis’ visit to the United States, writer and international religion consultant Paul Vallely predicted that the pontiff would have a “friendly but frank” message for the American people.

In a Sept. 14 lecture “Bringing the Message of a Poor Church to the Richest Nation in the World,” sponsored by the Graduate School of Religion and Religious Education, Vallely said that we can expect Francis to use his characteristic warmth and compassion to denounce consumerist society and global capitalism.

“This is a pope that primarily sees the world from the bottom up, not the top down,” said Vallely, author of Pope Francis: The Struggle for the Soul of Catholicism (Bloomsbury, 2015). “Francis has taken a hard line on the excesses of global capitalism and the indifference of the free market to poor people and to a polluted planet.

“He has said very bluntly, ‘This economy kills.’”

The hallmark of Francis’ papacy has been a pastoral concern for ordinary people, Vallely said, and this will also be the crux of his visit, as the papal agenda suggests: the pope will visit an elementary school in Harlem, meet with homeless individuals in Washington, D.C., and minister to inmates at a correctional facility in Philadelphia. 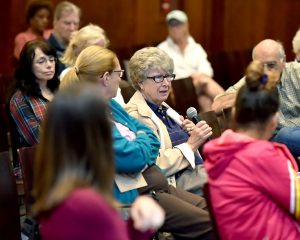 In that spirit, the pope’s message to Americans will be that the richest nation in the world has a duty to the poor and marginalized.

“He has said that the ancient golden calf has returned in a new and ruthless guise in the idolatry of money,” Vallely said. “Economic trickle-down doesn’t work for the very poorest. Inequality is the root of social ills. The powerful feed upon the powerless, and rich people are stealing if they do not share their wealth with the poor.”

He even took a subtle jab at American exceptionalism in recent weeks by reminding Americans that they are no different than their neighbors around the world, Vallely said.

“This trip is important for me to draw close to you and to your path,” the pope said during a virtual audience with homeless youth in Los Angeles. “It’s important for me to meet with you, the citizens of the United States, who have your history, your cultures, your virtues, your joys, your sadnesses, your problems—just like everyone else.”

Although conservatives have criticized the pope for not being firm enough on hot button issues, Vallely defended the pope’s adherence to doctrine. Where Francis differs from his predecessors is in the “pastorally revolutionary” way that he delivers these teachings—for instance, by instructing priests to forgive women who express contrition for abortions. 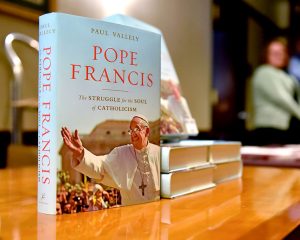 “Without changing one bit of Catholic teaching, which says abortion is unconditionally wrong, he was signaling to women for whom the decision had already been made… that he is well aware of the pressure that led them to make that decision,” Vallely said. “This is the pope’s tactical savvy on display… Perfectly orthodox on doctrine, but revolutionary on its semiotics.

“Stand ready,” he said. “When Francis arrives in the U.S., look for ambiguity and counterpoint in some of his messages, whether they’re in gesture, word, text, or subtext.”