skip to main content
Return to GRE
You are at:Home»Faculty and Research»Spiritual Pop Songs: Meditations on Life and Death

Tom Beaudoin, Ph.D., is an associate professor of theology in the Graduate School of Religion and Religious Education. He is the editor of the recently released book, Secular Music and Sacred Theology (Litugical Press, 2013) and he writes the blog Rock & Theology (www.rockandtheology.com). Photo by Michael Dames

When I used to go bowling as a kid, “sleeper” pins were the ones hiding behind the obvious pins in front. You had to reach them with a creative roll of the ball in order to have a good frame. In the movies, a film that surprises people by succeeding despite not presenting itself in obvious “hit” terms is called a “sleeper.”

Below are pop songs that are “spiritual sleepers”—songs that you wouldn’t necessarily consider to be spiritually significant, but, when heard or seen in a certain light, might take us into some theological reflections about life and death.

#5: Lacuna Coil, “My Spirit”
This song is an unusual account of life after death from the perspective of the dead. It emphasizes an encompassing spiritual indifference and freedom toward everything. (And as theology teaches us, imagining death is also a way of imagining how to live today.) This song’s delicately majestic, mystical refrain can create a space for wondering about the difference between life and death, but does not alight on any single interpretation about what lies beyond death. This is effected through the remarkable phraseology that invites and suspends an “answer” about what lies beyond death, described only as “where, where I go…” It opens itself to spiritual seekers for their further contemplation. 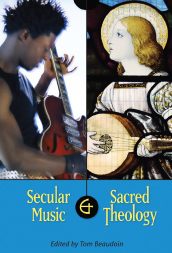 #4: Father John Misty, “Every Man Needs a Companion”
This is a song registering a deep, contemporary spiritual search, achefully sung. Misty (a.k.a. Joshua Tillman) mentions significant sources of spiritual insight for people today: sacred books (“the Bible”), religions and myths (“Joseph Campbell”), and music (“the Rolling Stones”). Campbell, a celebrated scholar of mythology and comparative religion, argued that basic stories about the meaning of life are essential for providing a sense of being at home in the universe. This tune outlines a quest that speaks to a great many in our culture: to find that “companion” to help make sense of life’s mystery.

#3: David Bowie, “Where Are We Now?”
Bowie joins a venerable religious and philosophical tradition of meditation on the mystery of death. He finds himself pacing Berlin, lost in musement yet aware that he is “walking the dead.” The song has a haunted, aged quality, as if to emphasize that, at this stage of his life, one of the most important spiritual-existential questions, lingering through and after the song, is “Where are we now?” Knowing the depth of this question might be more important than the answer. And so his way of living this dual reality—of ordinary life under the shadow of dissolution—is by imagining his life amidst the powers of nature (“sun,” “rain,” “fire”). It is as if he is asking: What about our lives will permanently endure, and will it endure like nature does?

#2: Japandroids, “The Nights of Wine and Roses”
The keening bottle-rocket transcendence of this song is continually checked earthward, offering listeners a relentless commitment to the world in its untameable wonder. “Don’t we have anything to live for?” they sing. This dalliance with nihilism is the jetpack that rock and roll so often provides for those who want to imagine testing the limits of their lives, for what “more” might appear in the process. “Well of course we do,” they sing, but bets are hedged: “till they come true,” the band is partying. The tune exemplifies the pleasure in singing out and celebrating our way across the gap between what our lives might eventually add up to and our shadowy awareness of it in the present.

#1: “The Harlem Shake” music video craze
“The Harlem Shake” was a recent dance-video craze set to a short, infectious stretch of house music by the electronic musician Baauer. Thousands of people have filmed themselves dancing it. The basic movement of all the videos is the same: the transition from mild individual “oddness” amid “normal” everyday life into the sudden explosion of a weird revelation that just below normal life is a party in which people become ecstatic personae. When the “isolated” individual opens onto the “weirdness” of the whole (formerly silent) community, it is as if to say: everyone here has something utterly surprising and untameable inside. It directs us to the “more” just below the surface of everyday life. What is that strangeness, beautiful and unsettling, that we bear inside?
VIDEO: Five Spiritual Sleepers
To watch these songs’ videos go to www.fordham.edu/spiritualsleepers.