Timothy Radcliffe, O.P., former Master of the Dominican Order and a member of the English province, spoke at Fordham on Feb. 12 about the Christian imagination. Photo by Bruce Gilbert

At the heart of the Christian story is a stirring drama about personal fortitude, genuine love, and the triumph of good over evil.

But if asked, would Christians actually describe their religion in that way?

Too often, the drama that pulses beneath the surface of Christianity is eclipsed by rules, semantics, and other technical aspects of the tradition. Awakening Christians to the beauty of their faith is not a challenge for the intellect, but for the imagination, said Timothy Radcliffe, O.P., former Master of the Dominican Order.

Father Radcliffe, a major figure in global Christianity who has spoken extensively on reconciling divisions within Catholicism and bringing the tradition into dialogue with the world, drew a standing-room-only crowd to Rose Hill on Feb. 12 for his discussion, “How Can Christianity Touch the Imagination of Our Contemporaries?”

“Most religion is boring, because it’s abstract. It’s remote,” Father Radcliffe said. “We long for the intimacy, the closeness of God.”

In order to tune others into this vital religious tradition, Christians must appeal to the imagination, Father Radcliffe said. To illustrate the point, he discussed the 2010 film Of Gods and Men, which depicts the true story of a community of Trappist monks caught up in civil war. The monks had been living peacefully in a small, predominantly Muslim village in Algeria when the outbreak of war and a surge of terrorism forced them to choose between fleeing for their lives and remaining to help the villagers. Ultimately, their decision to stay in the village leads to their kidnapping and murders.

The movie helps to open up the drama of Christianity, Father Radcliffe said, because it touches upon the genuine experiences of Christians. First, it tells the story of a particular people who, to the rest of the world, would seem to be anonymous individuals. Even so, they remain true to their identities as monks and devoted to their common purpose.

Second, the movie speaks to the experience of having to endure troubling questions in an uncertain world.

“We can identify with these monks precisely because they were fumbling, searching, trying to find their way forward. I think we’ve all been there—we’ve all been through those moments of hesitancy, of doubt… And each of us has to arrive at authentic faith at our own pace.” 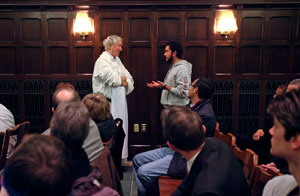 Father Radcliffe takes a question from the audience. Photo by Bruce Gilbert

Finally, despite the violent deaths of the monks, the movie points to the classic triumph of good over evil—though not in the way that many stories favor, namely, the bad guys being utterly vanquished by the force of good. Rather, it points to Jesus’ fundamental ethic of nonviolence.

“Every society needs its story of the victory of goodness, otherwise our sufferings have no meaning and we might as well give up,” Father Radcliffe said. “It shows a love and gentleness that cannot be defeated, a goodness that no violence is ever going to slay. I think that touches our imagination.”

The best way to awaken the Christian imagination, then, is to take to heart Jesus’ commitment to forgiveness and nonviolence, despite the cruelty he endured. In order to do that, Christians must be willing to engage creative people who can open up that story to their peers in new, unique ways.

“We will never touch the imagination of our contemporaries if we try to market Christianity as just a set of nice moral values, an innocuous spirituality,” said Father Radcliffe. “Christian doctrines only have meaning in that drama of life and death, the story of the monks, the story of Jesus Christ. What these doctrines do is they liberate us from facile, too easy understandings of the story.

“The truth of Christianity can’t just be delivered on a plate,” he said. “You have to rediscover that drama of death and resurrection… We have to give people the very best, which is the drama that catches you up into the godhead and turns you upside down.”

The event was co-sponsored by the Graduate School of Religion and Religious Education, theDepartment of Theology, and the Curran Center for American Catholic Studies.